It's summer - the best time to get acquainted. Outdoor festivals, parties, swimming pool bars, active holidays and leisure time all lend themselves to contacts with new women. Are you one of those who manage to grab the opportunity by the scruff of the neck or are you a bit reluctant and feeling insecure but at the same time eager? Can you recognize the signals when a woman wants you, when she's interested in having fun or even doing something more adventurous that evening? Conversely, can you read between the lines when it's a futile effort? Come learn how to easily recognize the flirting signals a woman is saying: Pick me up!

Men are globally limited in gesticulation compared to women. We can easily show interest, disinterest, pleasure and indignation without being overly rounded. We just naturally get straight to the point. This often pays off, in many life situations, but at the same time this social "dullness" limits us in perceiving small details, in accurately reading body language of our counterparts. Notice how in many films women move unnaturally, one might say, overplay their femininity and sensuality. It's easy to see why filmmakers resort to this - they simply don't want to demand perfect social sensitivity from the male viewer, so they twist the "volume" of gestures hard to the right. What is the the reality of the gestures used? Unlike men, who only have 10-15 gestures, they have women have over 50 flirting gestures. No wonder the one who is not among the best seducer in town will overlook many of them and miss the chance or drown in his own insecurities. The good news is that all it takes is a little and you can learn to notice the subtle nuances, as most of the familiar patterns are constantly repeated, and also create an environment for them.

Sight tells the most - we focus on eye contact

The man who in front of the woman is a sign of insecurity and nervousness.. At the same time, he is depriving himself of an absolutely crucial reading element. It's like driving around town in a car but not knowing the road signs. How would that work out? And would you feel confident? Answer for yourself... Don't hesitate at home. stand in front of a mirror a practice eye contact with yourself. You'll quickly get used to the eye-to-eye look and practice in the "field" will be easier. Then just watch how he looks at you. But at the same time, don't hypnotize her, or you'll come across as weird. If a woman is interested in you, not only will she look at you, but she will also get caught doing it, repeatedly. Friendly, curious or even challenging eye contact across a roomful of people is a sure sign that she's taken to you wants to talk to you.that she's interested in you. If you make eye contact yourself and she catches your eye, her eyelids and eyebrows rise and then drop immediately afterwards, you have a clear reason to go to her for an approach. Don't let yourself be persuaded for so long or you risk losing her interest.

When you're close together, talking at a bar or sitting at the same table, you have her face exposed in front of you like a canvas in front of a painter. You don't necessarily have to try to make her laugh with the best jokes, just be the listener and instead of talking too much. notice the expressions on her face. The most striking combination of elements is when a woman plays with her lipsbiting her lips, thinking or listening while agrees with almost everything to everything you say. The same goes for licking lips. It's a subconscious way to draw attention to them, but it's also because women's lips dry out when they're aroused. A skilled observer can also notice signals of interest, which include dilated pupils or overactive eyelids when a woman blinks excessively. 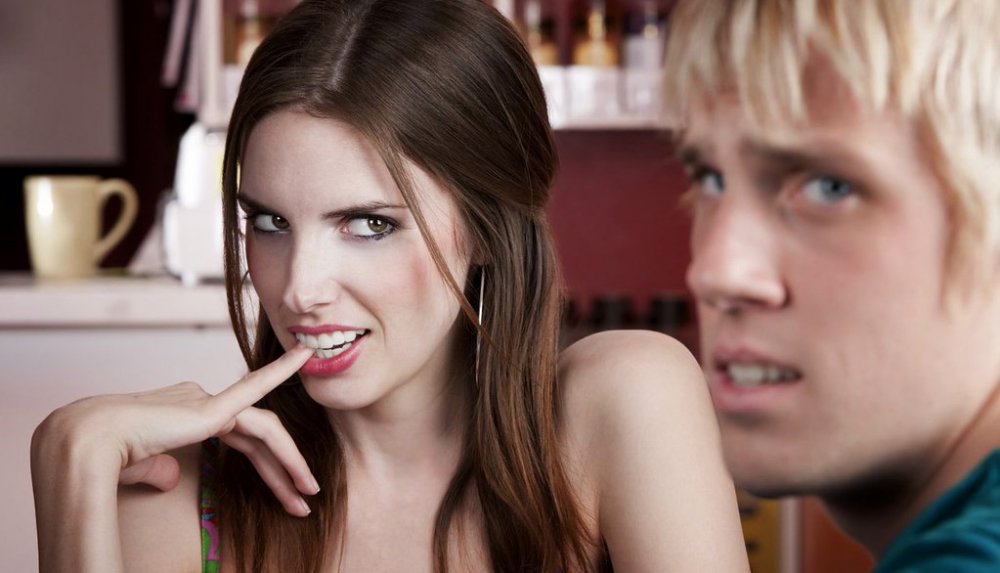 Touching and playing with hair

Women who are insecure often don't know what to do with their hands, so they play with their hair and whatever they can get their hands on. Don't confuse this body language with challenging gestures. The kind of gestures you long for, the ones you wait for, will appear once the nervousness subsides and the woman relaxes. Gentle movements such as mindlessly curling your hair or stroking are all signs that a woman is interested in you - the opposite of nervous! What should make you even more alert and help reassure you that you're on the right track are touching erogenous areas. When a woman is often touches her on the neckon the collarbones or the lips, she's signaling that she wants you. It's a common subconscious way of drawing attention to these parts of the body and letting you know she's sexy. He can also caress his thighsor adjust her pants to draw attention to her legs if she's confident in her body and doesn't want to hide anything. In this case, the most telling sign is when a woman puts a leg over her foot and the top foot points the toe at you.

Mirror her movements - see if she mimics you

When a woman agrees with you, tries to appear pleasant and interested in you, she often unconsciously adopts your gestures and movements. It's called mirroring. You can quickly tell she's on the same wavelength as you and ready to follow you.. But this method is hard to apply by just sitting at a bar or sitting at a table. It takes movement, lots of it! The perfect setting for this is a music festival, a chance to dance or go on an outdoor activity together when you meet on holiday. Don't forget that joint activities also lead to a quick deepening of the relationship through shared emotions. The mere interest of a woman to go out with you shows her interest in you. Don't let the opportunity slip by.